Building the smart city telecom infrastructure of the future

To build a smart building infrastructure, fiber must be the foundation to any network. In this blog, Jan Honig explains how fiber must connect to various network infrastructures, so it can support all applications. 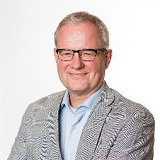 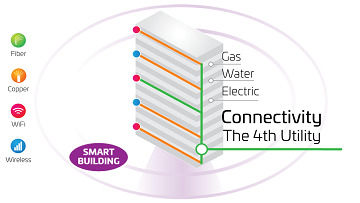 In the enterprise space (i.e., buildings, campuses and venues), smart concepts are being implemented at a steady cadence. This is because communications infrastructure that supports smart building applications is universal, flexible, and future-ready. Interestingly, the current situation in the public domain (the world outside of the enterprise space) is somewhat comparable to the early days of building cabling.

Structured cabling – introduced in the early 1990s by AT&T – was initially branded SYSTIMAX (now a CommScope brand). Back then, every application had its own cabling solution and differed by media and/or topology. Twisted pair, shielded cable, coax, Twinax, and dual-coax (among others) were the options on the media side. From a topology point of view, there were also various choices: bus-topology, ring-topology, daisy- chain-topology, and star-topology. When structured cabling was introduced, many of these media and topologies disappeared, leaving a single common cabling infrastructure for both voice and data.

But what about operational applications such as sensors and various systems including HVAC, lighting, access-control and security? Most of these applications could run over twisted pair solutions, while others required some adjustment. In the late 1990s, structured cabling solutions were introduced for most building applications. Instead of outlets placed at floor level, the outlets were positioned above the ceiling and structured cabling solutions for the Intelligent Building Solution (IBS) was born.

CLICK TO TWEET: CommScope's Jan Honig explains how building a smart city infrastructure should start with building the foundation.

Today, all new buildings make use of an IBS solution with a flexible Universal Connectivity Grid (UCG); however, it is important to note that IBS solutions must use Category 6A cabling to support future applications and easy upgrades. Indeed, even the latest Wi-Fi 6, intelligent lighting and active-Distributed Antenna System (DAS) solutions can run over a future rich UCG with Category 6A cabling. This infrastructure is often referred to as the fourth utility.

What do we see in the public space nowadays? It seems that the public space is approximately 15 years behind the private sector or enterprise environment; However, we see twisted pair rolling out to houses by incumbent operators. Some operators are also rolling out fiber-to-the-home (FTTH) networks, while others use coax for their data and video applications. In addition, companies are implementing fiber-to-the-business (FTTB), as well as fiber-to-the-antenna (FTTA) solutions. Last, but certainly not least, railways and water management companies operate their own dedicated communications infrastructure.

City streets need to be frequently excavated for install and repair, causing gridlock and creating an inconvenience for pedestrians because of the plethora of disparate cabling solutions. It is important to chart a more sustainable course for the future. More specifically, effective deployment strategies can be based on successful Enterprise rollouts. For example, what’s the best media of choice for the future? Most likely this is fiber combined with wireless. Remember: no wireless without fiber. Let’s start by building a Universal Fiber Grid (UFG) throughout smart cities with sufficient fiber for future applications, just like we have seen in the enterprise. 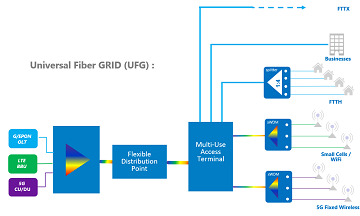 Examples of potential future applications include FTTH, FTTA, and FTTB. With 5G deployments kicking off around the country, we must be ready for densification (more masts in a city). Specifically, the fiber-grid should be flexible enough to hook-up a plethora of street furniture that will support the antennas of the future. The IoT sensors that will be installed can communicate with or via 4G, LoRa, Wi-Fi, 5G, and other protocols.

It should be emphasized that every antenna (for LTE and/or 5G) and Wi-Fi access point needs to relate to fiber. Moreover, implementing a fiber grid typically results in significant cost savings. During a May 2019 webinar hosted by the FTTH Council Europe (of which CommScope is a member), it was stated that an additional investment of seven percent (over a traditional FTTH network) enables the installation of a city-wide fiber-grid that can support future applications without the addition of new fiber in the short or medium term.

Building a smart city infrastructure should start with building the foundation (the UFG). Any “applications” the city wants to use can be connected to this GRID in a quick and easy way, without too much inconvenience for the citizens.