Fidget Spinner…Now Why Didn’t I Think of That?! 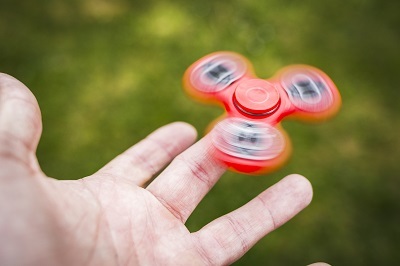 If you haven’t heard, seen or played with a fidget spinner by now then you must be living on another planet.

What’s so interesting about this phenomenon is that the origins are sketchy with stories of it being invented for ADHD, or to entertain a child and promote peace, or by a guy who was restless in IT meetings.

Amazing that at this point there isn’t a patent on file for this device. And because there isn’t a patent, there are variations of the fidget spinner on the market and even videos on how to create your own using everything from a bearing and zip ties to Legos. Imagine inventing a toy that causes such a stir that some schools have banned them!

In the networking communications industry, we want to know what is the next ‘big thing’ and who will invent it. Will the innovation set new standards or will people be able to create their own version of it?

At CommScope, we have a strong history of our innovations and are proud that they are not just a passing fad (remember the Sony Walkman?). As a new ongoing effort, we will continue to recognize and celebrate members of our technical community that bring innovative ideas to life and challenge the status quo through our Innovators in Action program. We’ll encourage them to develop, pilot, and even challenge ideas through collaboration and testing, as well as recognize these colleagues with awards and celebrate the winners at an annual summit. Look for more about these programs and innovators in the coming months!

In the meantime, get out your fidget spinner while it is still fashionable and let me know what innovation you wish was still popular today and what you think is the next ‘big thing.’

Kris Kozamchak is director of corporate communications at CommScope based in Richardson, Texas. She oversees the media, analyst and social media programs for CommScope’s business segments. Kris has more than 20 years of experience in the telecom and technology industry from companies such as BT and NEC, and she bring strong PR agency knowledge from her time at Edelman and Shandwick.  Kris has a bachelor’s degree in public relations and business from West Virginia Wesleyan and is a member of PRSA.
See all posts by this author