(Note: The following has been submitted as a guest post to CommScope Blogs by Chris Pearson, president of 4G Americas. Opinions and comments provided in this guest post, as with all posts to CommScope Blogs, are that of the author and do not necessarily reflect the views of CommScope.)

We hear about it all the time in North America. Spectrum is the oxygen, spectrum is the fuel, spectrum is the lifeblood for the wireless industry, and spectrum is one of the key ingredients that will help drive the economy in the U.S and Canada. In fact, to my knowledge, it was the former FCC leader, Julius Genachowski, who likened the need for spectrum to our vital need for oxygen. Various analysts and organizations have studied the status of allocated and required spectrum and it is known and acknowledged by the U.S. FCC that 500 MHz of spectrum will be needed in the U.S. by 2020 to meet the growing demand of data.

However, the success of the entire Americas region is essential to consider. What is the health of Latin America in terms of the oxygen to breathe in the wireless industry? The regional ecosystem for devices, infrastructure, applications and services must be vibrant for all the Americas; therefore, the focus of 4G Americas goes well beyond the U.S. and Canada. The Americas -- North, Central and South America -- represent over a billion wireless connections and users are demanding more mobile broadband connectivity and advanced services. With this context as a primary focus, 4G Americas decided to take a careful look at spectrum allocations and auctions in Latin America to determine any impending challenges to service in the region. 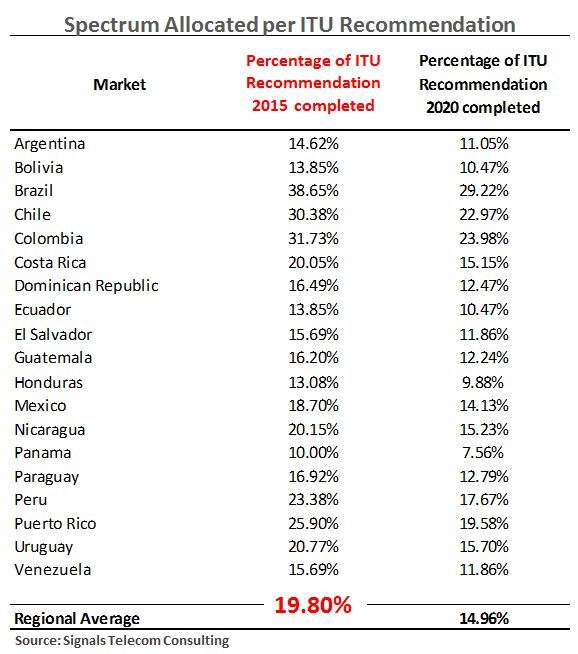 In Latin America, where mobile penetration exceeded 112% in 2012, HSPA and LTE mobile broadband is more ubiquitous than fixed broadband. It is vital in the region that Internet connectivity and telecommunications be improved to fuel the economy, and to improve education, transportation and healthcare. Mobile broadband is the great opportunity to close the gap in the digital divide. It is a fact that internet access service through mobile broadband has become increasingly relevant, especially given the positive economic impact of broadband. A 2012 study by A.Garcia-Zaballos and R.Lopez-Rivas showed that for every 10 percentage points of increased broadband penetration in Latin America and the Caribbean, the GDP by grew 3.2% and productivity grew by 2.6%.

On a global basis, according to Cisco, mobile broadband data traffic grew 70% in 2012 and reached 885 petabytes per month. In addition, it is expected to grow 13 times from 2012 to 2017. Latin America cannot and should not be left behind in this surge of connectivity because of a lack of spectrum. 4G Americas strongly believes that more internationally harmonized spectrum throughout the region will allow continued progress of technology evolution to serve society's growing demand.

Chris Pearson is the President of 5G Americas.  In his executive role, he is responsible for the overall planning of the organization and providing management for the integration of strategy and operations in the areas of technology, marketing, public relations and regulatory affairs.  As President of 5G Americas (formerly called 4G Americas), Mr. Pearson represents the organization’s Market Representation Partner interests within the 3rd Generation Partnership Program (3GPP) organization.

Mr. Pearson led the organization from its inception in 2001 as the 3GPP family of technologies market share grew from 10 percent in 2001 to more than 93 percent in North, Central and South America. Mr. Pearson came to the organization from the Universal Wireless Communications Consortium (UWCC) where he served as Executive Vice President in charge of the strategic executive management of the global TDMA wireless technology consortium.  Prior to joining the UWCC, Mr. Pearson held several senior technical and marketing positions at AT&T Wireless and GTE.

With more than 30 years of experience in the telecommunications industry, Mr. Pearson is a recognized spokesperson in mobile wireless and 5G technology trends and has spoken at technology conferences throughout the world including CES, Mobile World Congress, CTIA Super Mobility, LTE World, 5G World North America, and 5G Forum USA.

Mr. Pearson earned a Master of Business Administration degree from The Albers School of Business and Economics at Seattle University and a Bachelor of Arts degree with emphasis in Marketing and Finance from the University of Washington.