Scaling Up to 12 (and More) Remote Radio Units 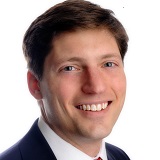 At CommScope, we have noticed a strong trend with remote radio unit (RRU) deployments in the field: the numbers keep growing. It seems that the more remote radio heads that can be placed on the tower the better. While three or four RRUs on one tower is common, we are seeing lots of design requests around eight, nine or even 12 units.

Attempting to connect this many units with separate power and fiber cables is impractical. There is only so much space to run cables within a monopole or cable tray (for rooftop), and tower loading can become an issue. Operators charged on a per cable or cable volume basis will also hate to design such solutions with their high expected monthly costs.

On the opposite side, running one monster cable that supports 9 or 12 RRUs may also prove to be impractical. Cables this large have drawbacks with regards to difficult handling during installation and low bend radius. It is also difficult to support that many RRUs out of one junction box or breakout point, as RRUs may be placed at different heights, creating long jumper/tail runs. Systems using over voltage protection may need to set a maximum jumper length to around 15 feet/5 meters to limit the risk of a power surge to the electronics. Additionally, RRU count will vary by site, and it would be expensive to deploy 12 RRU cabling capability when only three RRUs are present today.

A great middle-ground option is to choose a hybrid trunk cable that can support a sector of three or four RRUs and use this as a building block when higher RRU counts are needed. For example, one hybrid trunk that contains eight power conductors and 16 optical fibers can support a sector of four RRUs with spare fibers in case of damage or upgrades. If a planned site has eight RRUs to be deployed, then a second trunk can be added to support the second sector of four RRUs. See how this works for up to 12 RRUs using a four RRU trunk building block: 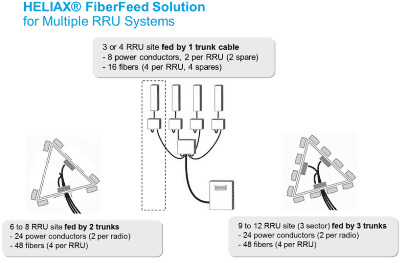 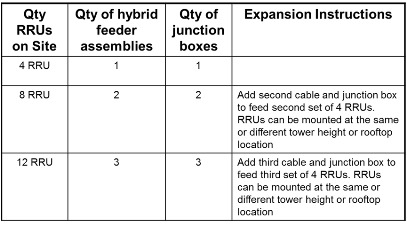 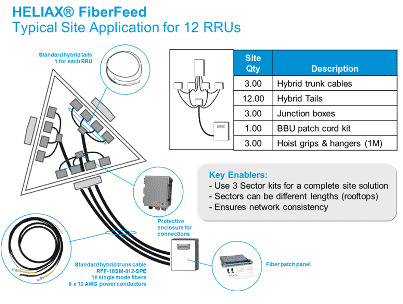 No two systems are alike, and even within the same network, there will be different site-by-site deployment scenarios. Use of a standardized building block can make it easier to support all of the variations without having to develop a new solution set every time. 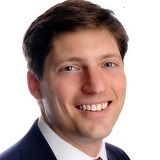 Eric Leichter is director for business development for CommScope Mobility Solutions, focused on fiber and power solutions for remote radio deployments. He has over 15 years of experience with telecommunications and optical fiber solutions, including roles supporting application and field engineering, product management, standards and training. While supporting a mix of wireless, data center, campus, and outside plant applications, Eric has experience with a multitude of vendor and generic solutions sets. He is a multiple patent holder, has provided several dozen published articles and conference presentations, and is a LEED Green Associate. Eric has an engineering degree from Virginia Polytechnic Institute and State University (Virginia Tech) and an MBA from Gardner-Webb University.
See all posts by this author