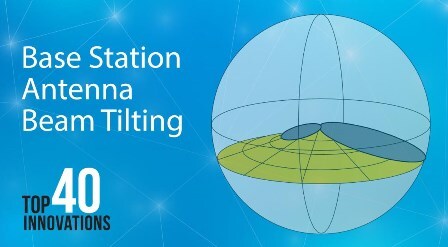 Definition: Base Station Antenna Beam Tilting includes two significant innovations—the addition of a phase shifter to the feed network of a base station antenna and remote electrical tilt—which enabled wireless network operators to improve their coverage areas and network performance.

In the mid-1990s, when mobile operators worldwide needed to find better ways to minimize interference and reduce costs in their expanding networks, CommScope and its acquired companies responded with key base station antenna innovations that have set the industry standard.

One of those innovations was the addition of a phase shifter to the feed network of a base station antenna. By introducing a phase offset between vertically-displaced radiating elements, the antenna’s radiated energy beam could be tilted below the horizon. This beam tilting applied to the pattern over a full 360 degrees in the horizontal direction. In contrast, the existing mechanical downtilt solutions of the time only tilted the pattern in the region where the main beam was located. The phase shifter enabled mobile operators to reduce the signal in all directions, which is what they needed for better antenna performance.

The next innovation came in the form of remote electrical tilt (RET), a patented solution that enabled operators to adjust the tilt of the antenna beam remotely by using an actuator to drive an electro-mechanical phase shifter. RET technology improved upon fixed electrical tilt and remains a standard antenna feature in the wireless industry today.

As cellular networks grew in the early 1990’s, the only way to add capacity was to add more cell sites. Initial cell sites may have been up to seven miles apart, but as cell phones became more popular, capacity needs grew to where operators needed to handle two or three times as many calls. The problem was that when new cell sites were added closer to existing cell sites, the original antennas interfered with the new ones unless something was done to reduce those antennas’ coverage areas.

What mobile operator technicians did to address this issue was to mechanically tilt an antenna so its beam wouldn’t travel as far toward the horizon. Technicians could obtain tilt patterns from antenna manufacturers, so they would know how much coverage would drop by downtilting an antenna a certain number of degrees.

However, mechanical tilting cost a lot of money because it required technicians to climb towers or up to rooftops to adjust the antennas. In addition, the theoretical tilt angles proposed by manufacturers didn’t always match what was needed in the real world, so additional tower climbing and adjustments were often required. Finally, manually tilting an antenna reduced coverage directly in front of the antenna, but it didn’t reduce coverage out at the sides of the antenna, so it didn’t solve interference problems completely. Clearly, another solution was needed.

The phase shifter made better coverage patterns possible once network operators needed to downtilt their signals. Remote electrical tilt made it possible to adjust tilt without having to climb the cell tower. These enhancements to antenna technology made wireless networks perform better and at less cost. The ability to adjust, optimize and control antenna patterns remains a key tool for delivering high-performing wireless networks to users.

CommScope has continued to evolve RET based on phase shifting. Realizing that the antenna system had to work in harsh outdoor environments including humidity, dust, cold and heat (-40 to +150 degrees), CommScope ruggedized the phase shifting components and conformally coated the electrical contacts to prevent corrosion. Conformal coatings also prevent metal-to-metal contact between components, which can cause passive intermodulation (PIM) that increases noise in the system. Another innovation was precision design that exerted enough pressure to deliver optimal capacitive coupling, but not so much pressure that the connecting arm contacts would wear through the hermetic sealing.

RET practices have also evolved as the mobile network matures. In the early days, it might have been necessary to adjust an antenna once or twice in its lifetime, but now, as cell sites are being added constantly, adjustments occur more frequently. In some cities, there are cell sites every 600 feet now, and every time a new layer of cell sites is added around an existing cell site, it’s necessary to adjust antenna beam tilt to eliminate interference. With the latest new LTE deployments, the concept of self-organizing networks (SON) calls for readjusting antennas depending on the capacity needs of the network in given areas. So it’s now possible to adjust antennas several times a day using the same RET technology.

Over the years, through internal development as well as acquisitions, CommScope has developed a robust patent portfolio around RET technology that has made CommScope one of the consistent market leaders and led to the licensing of its patents to several other companies. As cellular networks become ever denser and more complex in the future, CommScope’s RET technology will enable the evolution.

Louis Meyer, P.E., is director of technical sales for CommScope Mobility Solutions. Lou has spent a lifetime advancing RF technology, taking it from the drawing board to practical use. Over the years—in various roles with Allen Telecom, Andrew Ltd. and CommScope—Lou has been responsible for supporting the sales teams for such solutions as remote antenna control systems, transmission lines, diplexers and other important components. Prior to joining Allen Telecom, Lou worked with Decibel Products as vice president of Antenna Design and vice president of International OEM Relations. Earlier, Lou worked with Harris Corporation in RF communications and Bendix Corporation in their Missile Systems division. Lou holds 10 patents and was previously chair and vice-chair of the TIA’s TR-8.11 Antenna Standards subcommittee. He earned his Bachelor of Science degree in electrical engineering from Marquette University in Milwaukee, Wisconsin, and is currently a registered professional engineer in the state of Texas.
See all posts by this author