Ruckus Networks December 8, 2015
AUTHOR: Sundar Sankaran, Chief Wireless Architect – Wi-Fi
Just in time for the holidays, we can confirm it’s safe to put up your Christmas lights – without degrading your Wi-Fi connection. Yes, we actually tested it. And unless you’re Clark Griswold, you’ll be safe.
The back story: British regulators at Ofcom reported last Tuesday with an in-depth look at the UK telecoms and wireless networks. Ofcom also unveiled a Wi-Fi Checker app that people could use in their homes to test wireless and broadband signals – and the news release said home Wi-Fi can be hampered by “interference from other electronic devices, such as a microwave oven, baby monitor, a lamp - or even Christmas fairy lights.”
The Guardian quickly picked up on the “festive angle” with a breaking story under the headline: “Warning that Christmas fairy lights can slow your Wi-Fi.” And thus a global news meme was born, sparking a range of commentary, speculation, advice and hundreds of mostly cheeky comments about “first world problems.” While some of the discussion was thoughtful and even offered a reality check, we didn’t see any new data to counter Ofcom’s non-data.
So…three of us spent an afternoon last week in the Faraday cage, a “clean room” approach to testing equipment while blocking electrostatic and electromagnetic influences. 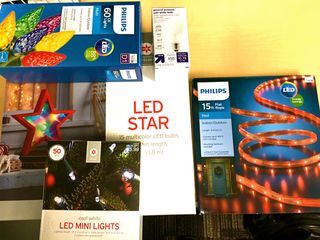 Here’s what we did to test the latest meme (see visual evidence below): We went to a local Target and bought four of the craziest LED “fairy lights” we could find. We took them into the Faraday cage and used a powerful spectrum analyzer ($50K+) to determine if the lights were emitting any energy that would interfere with Wi-Fi. We plugged in each strand one by one, and then all at once. We then did a second test setting up a Wi-Fi network with an access point and client devices to do a “lights on” and “lights off” test to see if there was any degradation of Wi-Fi performance.

The result? Nada. Zip. Zilch. LED Christmas lights emitted no detectable interference in the first test, and had zero effect on Wi-Fi performance in the second. Suffice it to say that LED lights are not the scrooge of Wi-Fi-mas.
So go ahead and plug in your Christmas lights. While doing so, consider these pointers:

P.S. Let us know if you find a set of Christmas lights that purportedly degrades your home or office Wi-Fi performance. We’re happy to go back in the Faraday cage…

Mystery of the C-Band Auction Costs

With the 3.7 GHz Service (aka C-Band) auction just a short time away, participants are finalizing their bidding strategies and making sure they have done their due diligence on the incumbents in the band. But are bidders aware of exactly what relocation costs they will incur beyond the license purchase price at auction? Joanna Lynch answers this and other questions in this blog.