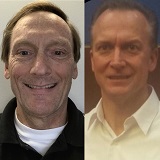 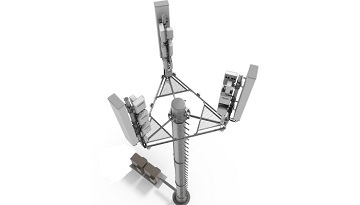 This blog was originally posted in ECN Magazine on October 5, 2018.

With the rise of high-bandwidth applications such as streaming video and a growing expectation that their devices will work everywhere, mobile subscribers are demanding better coverage and higher data rates from their service providers. Mobile operators are responding to this demand by increasing the density of their networks, installing distributed antenna systems (DAS) in buildings and other venues, and deploying new, higher-powered remote radio units (RRUs) and multiple-input and multiple-output (MIMO) integrated antennas on their macro network towers. However, densifying networks and using higher-powered RRUs pose significant cost and deployment challenges, especially when it comes to powering remote radios. In this blog, we’ll look at these challenges and how DC power-boosting technologies can address them.

Power to the Tower

Traditionally, RRUs in macro cell sites have required from 400 to 750 watts of DC power, but to deliver coverage and higher bandwidth to a more widely-distributed group of subscribers, mobile operators are now using higher levels of MIMO antennas and deploying RRUs that require up to 1,400 watts. While these changes can double traffic capacity and increase the coverage area of a given tower, the new RRUs draw almost three times as much power.

Cell towers are finely-engineered structures built to accommodate a specific mix of RRUs and antennas powered by a specific gauge of copper cabling. Wireless network engineers deploying wireless systems on cell towers must account for both weight and wind loading in their designs. In a tower using 400-750 W RRUs, for example, mobile operators use six 10-gauge power cables weighing 1 lb/ft. But RRUs that run at 1,200-1,400 W can require 4-gauge cables that weigh 3 lb/ft. These 4-gauge cables are also larger in diameter, which increases wind loading. Cable cost, re-permitting, and additional rental fees are also major factors. Using a DC boost system such as PowerShift, when installing these higher power radios, allows the re-use of the existing power cables in most cases, saving both capital and operating expenses.

CLICK TO TWEET: CommScope and TESSCO experts explain how to boost power levels and slash costs in Remote Radio Systems.

As a result, deploying higher-power RRUs can make it necessary to reinforce the tower to withstand the added weight and wind loading. So, in addition to the added cost of new RRU power cables, the project will incur a number of indirect costs such as structural engineering fees, crane rentals, labor, and permit fees. Moreover, the rent on the tower will likely increase. In all, the cost to upgrade a single tower could be as high as $15,000-$20,000. Multiply that by hundreds of towers, and the simple addition of higher-power RRUs becomes a major financial challenge.

Small cell installations using DAS pose a different power problem: the need for battery backup. To maintain reliable in-building service, mobile operators and building owners deploy battery backup systems for their small cell deployments. In large buildings, stadiums, transit stations, and other major structures, there may be hundreds of small cells connected to deliver the requisite capacity and coverage. For each small cell, there must be a battery backup system. In many cases, designers locate many small cells in intermediate distribution frame (IDF) closets to simplify connectivity and economize on battery backups, since only one system is needed for the whole IDF closet. A voltage drop compensation six system can allow the power to be centralized and served from one battery plant.

In the last 2 years, telecom equipment vendors have introduced DC power-boosting systems that address the challenges of macro tower and small cell DAS deployments. Essentially, a power-boosting system makes it possible to support higher-power RRUs using the same 8-10-gauge cable as before, eliminating the need to re-engineer the macro cell tower.

A DC power boost system is a more efficient way of transmitting electrical energy across the cable: it takes a nominal 48 volts and boosts it to a regulated 54 volts at the RRU in a macro deployment. RRUs are constant power devices, so as the voltage is increased, the current is reduced and as a result the size of required copper cable is also reduced: power loss in the cable is a function of the square of the current.

Another benefit of DC power boosting on a tower is that it improves battery backup time. By delivering a higher voltage over existing cable and thereby delaying the RRU low voltage disconnect, DC boost solutions increase the available backup time that a battery can provide, even though it is backing-up a higher-powered RRU.

A DC power boost system is deployed at a cell site in a cabinet at the base of the tower (picture). This approach not only saves the cost of changing cabling and re-engineering the tower, but it requires no new or modified permits. 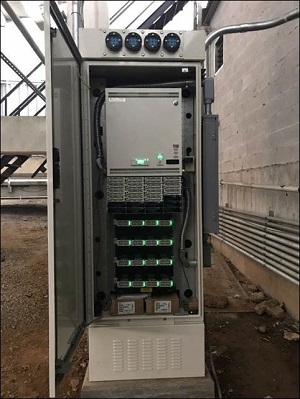 A DC power boost system is deployed at a cell site in a cabinet at the base of the tower.

DC power boost systems have been on the market for two years now and have been successfully deployed in hundreds of towers. By changing the voltage level rather than RRU cabling, mobile operators are saving millions of dollars of CapEx and OpEx, and speeding deployment time as they improve their network coverage and capacity 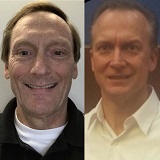 John Hanley is director of Commercial Strategies for CommScope, responsible for supporting efforts to market Power products for CommScope on a global basis—with particular emphasis on the PowerShift product. John has been with Andrew/CommScope since 1977 with various technical and marketing positions in the Satellite Antenna, DAS and Cellular products. John holds a Master of Science degree from Northern Illinois University and is based in Joliet, IL.

David Heitmann is currently the Business Development Manager for Product Marketing at Tessco. Dave joined Tessco in 1998 and has held different sales positions over the years to support the carrier, neutral host and systems integrator markets. Dave specialized in technical sales for power, small cell and antenna applications. Prior to Tessco Dave served in law enforcement and the United States Marine Corps. He holds a degree in Business Administration.