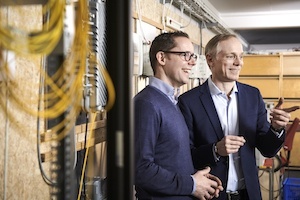 "We've been trialling ARRIS R-PHY technology for many months now," said Stofa CTO Jacob Larsen. "We have over a hundred customers currently using this technology, and the initial feedback is very, very positive. We are extremely happy with the results of our partnership with ARRIS."

Stofa and ARRIS announced their partnership less than a year ago. Thanks to ARRIS's industry-leading E6000® CCAP Core and NC2000 R-PHY optical nodes, the cutting edge vision for a high-speed network is already becoming a reality.

ARRIS's R-PHY technology enables Stofa to virtualize and decentralize headend functions and elements of the Open Systems Interconnection (OSI) layer. This enables more efficient use of the network media, enabling service speeds of up to 1Gbps. The upgraded network also supports seamless streaming for broadcast video and VoD for customers without impacting their headline broadband speed.

R-PHY is live and running

"We're very excited to be pioneering Remote PHY deployments in EMEA and seeing the real-world speeds and video quality first-hand," says Dan Whalen, President of Network & Cloud, Global Services. "Stofa has shared our vision for a next-generation network from the start, and we're proud to be making history with them."

Stofa plans to deploy additional ARRIS NC2000 optical nodes in the future, bringing Gigabit speeds to more of their customers. Later this year, it will roll out the new improved service to additional parts of its footprint.

We continue our “A minute with CommScope leaders” blog series with Chief Technology Officer Morgan Kurk, who leads CommScope’s team of technologists. Morgan spoke to us about technology trends in the home and wireless networks.