Wireless operators are facing demand that pushes network capacity to its limits, particularly in densely populated urban areas where additional sites are difficult or impossible to secure. Recent innovations in small cells, particularly the newest capabilities of CommScope’s Metro Cell antenna solution portfolio, have opened up new avenues of capacity to these overburdened networks by leveraging new developments in densification, spectrum availability and overall efficiency—the three keys to boosting capacity quickly and economically.

The second key element of increasing network capacity is the availability of spectrum. Current and growing demand has wireless operators scrambling to increase the spectrum available to their networks, and the recent release by the FCC of conditional access to both the 3.5 GHz citizens band radio system (CBRS) and unlicensed 5 GHz band commonly used by applications such as Wi-Fi networks has created a rare and valuable opportunity for networks to expand the bandwidth available to them—if they have the technology to successfully leverage these newly available bands. Here also, the VVSSP-360S-F Metro Cell antenna solution provides immediate access to enhanced capacity. The antenna supports established LTE bands in the 1.7–2.7 GHz band, and also natively supports the 3.5 GHz CBRS and 5 GHz unlicensed band.

Wireless operators are feeling the capacity crunch like never before. Even as the number of subscribers has leveled off, the amount of data moved over networks continues to explode. The effects are most pronounced in densely populated urban areas, where the higher concentration of demand is exacerbated by a lack of suitable cell sites. Opportunities and locations to add more macro cell sites are very few, and strict zoning regulations have made many small cell sites unavailable for all but the smallest, most unobtrusive solutions.

The most direct means of increasing network density—and hence, capacity—is by the addition of more small cell sites in the covered area, which allows for greater spectrum re-use. The challenge here is that deploying great numbers of small cells can easily run afoul of local zoning ordinances and other size or appearance restrictions. In addition, these restrictions can put operators into an impossible compromise between size and performance, limiting the capacity benefits of those small-cell sites that can be deployed.

CommScope’s newest VVSSP-360S-F Metro Cell antenna solution addresses this challenge by stealth. At two feet in length and eight inches in diameter, the VVSSP-360S-F Metro Cell antenna is the slimmest, most compact small cell solution available today with its capabilities and port counts. Because of its slim profile and unobtrusive appearance, it is compliant with more zoning restrictions and, therefore, it dramatically increases both the number and diversity of site locations available to an operator as they add a small-cell layer underneath the macro network.

The VVSSP-360S-F antenna is part of CommScope’s fully-featured integrated Metro Cell solutions, which are available with fiber or microwave backhaul capabilities. Designed for maximum versatility, the VVSSP-360S-F solution can be affixed to street lights or virtually any vertical street furniture. This adaptability provides operators with superior small-cell network design freedom as it solves the challenges of most zoning restrictions.

The VVSSP-360S-F Metro Cell antenna, the smallest on the market today. 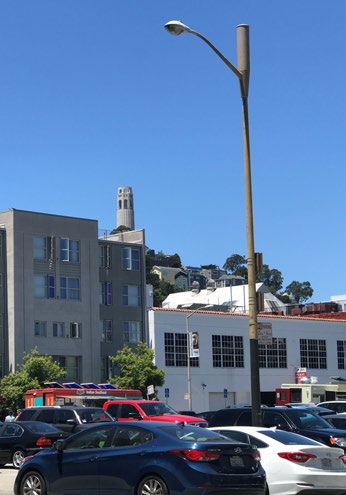 Can you spot the Metro Cell deployment in this picture?

The second key element of increasing network capacity is the availability of spectrum. Current and growing demand has wireless operators scrambling to increase the spectrum available to their networks, and the recent release by the FCC of conditional access to both the 3.5 GHz citizens band radio system (CBRS) and unlicensed 5 GHz band commonly used by applications such as Wi-Fi networks has created a rare and valuable opportunity for networks to expand the bandwidth available to them—if they have the technology to successfully leverage these newly available bands.

While the availability of the 3.5 and 5 GHz bands presents an exciting opportunity for increased network capacity, several key obstacles still exist. The 3.5 GHz band requires the use of a SAS solution in order for an operator to comply with CBRS access priority regulations. The 5 GHz band (and some 3.5 GHz applications) require the addition of a licensed assisted access (LAA) solution in order to integrate the site with the macro network. Another obstacle is the fact that operators will need to add antennas and ports in order to use these new bands, which introduces significant logistical and cost challenges, particularly in small cells that are already strictly limited in size and appearance by zoning. Here, the VVSSP-360S-F Metro Cell antenna solution provides a simple, compact and highly economical solution. It supports 3.5 GHz (four ports) and 5 GHz (two ports) in addition to the PCS, AWS, WCS and BRS bands already in general use (four ports). Just as importantly, the VVSSP-360S-F Metro Cell antenna solution is fully FCC Part 15 compliant for the 5 GHz band. This regulation requires that the antenna display these characteristics:

CommScope engineered this compliant solution with the use of innovative patent-pending technology that improves signal focus and yield EIRP figures and RPE that avoid interference and increase the utility of the 5 GHz band. 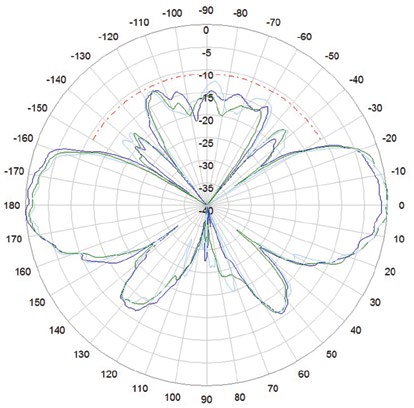 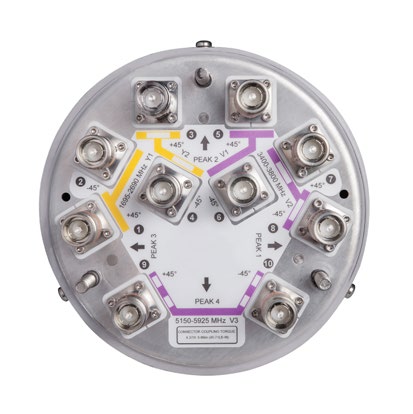 Out-of-the-box connectivity for 3.5 and 5 GHz bands

These features of the VVSSP-360S-F Metro Cell antenna solution also have the effect of increasing efficiency over all covered spectrum, not only in the 3.5 and 5 GHz bands. The four-port configuration for established 1.7–2.7 GHz LTE bands supports MIMO operation, which increases the amount of data that can be carried within a given band.

In four-port operation, the VVSSP-360S-F Metro Cell antenna solution employs a unique “orthogonal peanut” pattern diversity approach that increases coverage within the cell and improves quality of service by offsetting pattern nulls between the four ports. Previous four-port antennas typically displayed nulls in the same position across all four ports; by adopting two orthogonal bidirectional patterns, the VVSSP-360S-F Metro Cell antenna solution covers the nulls and eliminates dead spots. In practice, this solution increases not only coverage but capacity as well due to its enhanced efficiency. 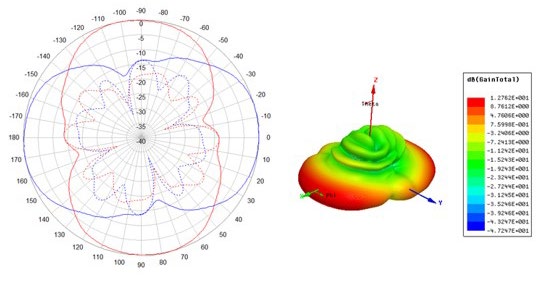 This increased capacity comes in a footprint that is smaller than side-by-side configurations (requiring four columns around the reflector instead of the usual six), which is part of what makes the VVSSP-360S-F Metro Cell antenna solution so much easier to deploy where zoning and aesthetic considerations are limiting factors.

Wireless operators can improve their competitiveness by increasing network capacity—particularly in densely populated urban areas—through a strategy that leverages new developments in densification, spectrum availability and overall efficiency. Much of this capacity battle is being fought in the small-cell space, where CommScope’s VVSSP-360S-F Metro Cell antenna solution provides significant advantages across all three elements.

Soon, CommScope will be releasing new variants on the VVSSP360S-F Metro Cell antenna design that will add options for different port counts, expanding MIMO opportunities and further increasing practical deployment options for operators. In conclusion, the VVSSP-360S-F Metro Cell antenna solution from CommScope should be included in every wireless operator’s immediate and longterm network capacity strategy. 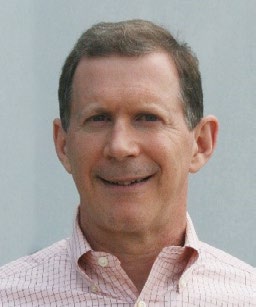 Martin Zimmerman is an engineering fellow with base station antennas for CommScope, and is responsible for driving the development of next-generation antenna products based on collaborations with key customers. Other duties include managing the IP portfolio and providing technical guidance on M&A activities. Previously, Martin served as director of engineering and senior principal antenna engineer for the same team.

Prior to that, he worked as an antenna engineer for Sinclair Technologies and Analex, a NASA contractor. Martin holds 28 U.S. and numerous foreign patents in addition to having been published in several journals. He has a BS in electrical engineering from California Institute of Technology and an MS and PhD in electrical engineering from University of Illinois, Urbana-Champaign.