CommScope Definitions: What Is QAM?

Do you know what QAM technology is? As part of our CommScope Definition blog series, we explain what QAM is, how it can be deployed and why operators can benefit from deploying this technology. 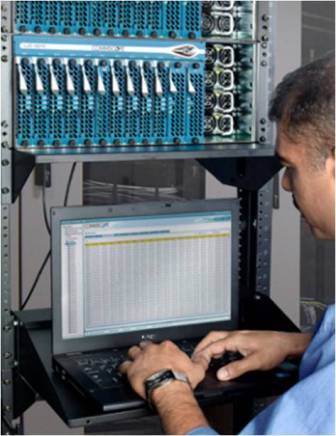 QAM (quadrature amplitude modulation) is pronounced as a one-syllable word that rhymes with Guam. QAM has to do with the way that digital information is transmitted between two points. Fundamentally, QAM enables an analog signal to efficiently transmit digital information. It also provides the means by which an operator transmits more bits in the same time period, which effectively increases the bandwidth.

QAM is a modulation scheme that transmits data by changing the amplitude, or power level, of two signals: first in-phase with the incoming data and the second 90 degrees out of phase. QAM relates to the number of bits of information encoded in each time period. For example, eight bits defines the number of combinations that are possible for those two signals (in phase and 90 degrees out of phase). If there are 256 combinations possible for those eight bits, then it is referred to as 256 QAM. Using a single time period to convey 10 bits would be 1024 QAM.

In the cable television industry, QAM systems are used by multi-system operators (MSO) and other network operators to deliver video, voice and data services. QAM systems are the mechanisms that format services in hubs and headends, which are facilities where signals are processed and distributed over a cable system and to be delivered to subscribers’ homes where set top boxes, cable modems, and embedded multimedia terminal adapters (eMTA) convert the QAM signals back into useful voice, data and video.

Network operators are experiencing an ever-increasing need for more QAM channels, driven by the explosive demand by consumers for high-speed data, high-definition television, video-on-demand, network personal video recording, Internet Protocol cable television and digital phone service. From an overall cost perspective, QAMs matter to MSOs. They currently represent a significant portion of the capital spent for deploying digital video services. In the past, each individual service, such as high-speed Internet, broadcast cable television, and video-on-demand, had its own QAM modulator in a low density edge QAM. RF splitter/combiners were used to multiplex together the complete service line up. That led to racks and racks of QAM modulators and complex combining networks.

Wideband edge QAM devices have appeared to simplify the QAM modulator profusion. The QAM modulators evolved from managing individual services to managing multiple services and also from working with small groups of QAM carriers to supporting the entire 50 MHz–1 GHz spectrum on each port. A wideband edge QAM device is a dense, scalable solution that is vital to supporting additional advanced and next-generation services over HFC (hybrid fiber coaxial) networks. It enables cable operators and MSOs to integrate new service offerings seamlessly to support their business initiatives.

The current generation of wideband edge QAM modulators has incredible density—up to 2,560 QAM channels per chassis – and can manage all of the MSO-offered digital services across the entire downstream spectrum from each individual RF port.

Deploying a wideband edge QAM brings change and value to network operators. The evolution moves operators to a software-controlled platform from which to seamlessly add or reconfigure services, and it does that while reducing both their capital and operational expenditures. That combination is both exciting and rare.

Article was originally published on May 7, 2015