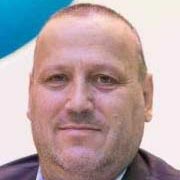 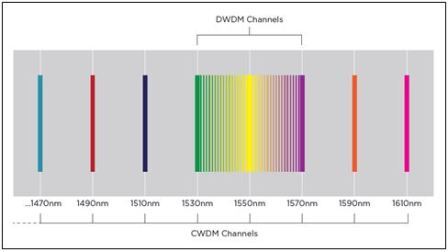 Wave Division Multiplexing (WDM) is a method of combining or separating multiple wavelengths of light in or out of a single strand of fiber with each wavelength of light carrying a different signal. The use of optical filters allows a certain range of wavelengths and let another range of wavelengths pass through. CommScope uses thin-film filter technology (TFF) to obtain this optical effect. Thin layers are stacked together. Consecutive reflections on the interfaces between these layers create interference effects that let light pass through for certain wavelengths and reflect others.

WDM is a cost effective way to increase the capacity of a network. There are two different types:

Typically CWDM and DWDM have lower insertion losses compared to optical splitters. This significantly increases the reach of the network from the central office. Moreover, every customer has an assigned wavelength(s), providing greater security and making eavesdropping difficult if not impossible.

There are a few different ways to utilize WDMs in your network:

A mux (commonly known as a multiplexer) combines multiple wavelength channels on a single fiber, and a demux separates them again at the other end. A mux/demux set-up is especially useful to increase the end-to-end capacity of a deployed fiber. The mux is typically located in the central office, and the demux unit located in either a cabinet or splice closure from which point the fibers go to their destination in a star-shaped topology.

Instead of separating the wavelengths at one end, it is also possible to add or drop individual wavelengths at different points across the line while the other wavelengths remain untouched. This is often the preferred choice when the topology is such that the sites are grouped in a ring structure or when the distance between them is long.

One fiber vs. two fibers

Passive optical components can have a significant impact on the efficiency of communication network roll-outs. The incorporation of passive WDM devices reduces the amount of fibers in the network, decreasing both the footprint and investment cost of network roll-outs. In existing networks, these components allow capacity upgrades at a relatively low cost without additional construction works. 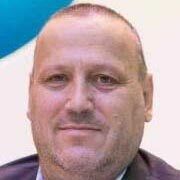 Wes Oxlee is director of Business Development and Strategy for the CommScope Connectivity Solutions business unit. Wes has 34 years of telecommunications industry experience with a primary focus on optical fiber external plant networks. Following a 16-year career with Telstra, where he was the national technical specialist for Fiber Optics External Plant, he joined CommScope in 2000. Wes is a certified fiber-to-the-home professional and, in his current role, he is focused on developing innovative fiber solutions and architectures that will support the next-generation wireless networks.